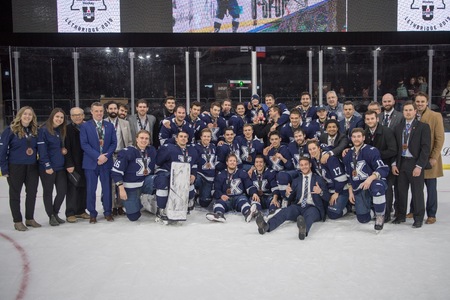 Lethbridge, AB – The StFX X-Men defeated the Saskatchewan Huskies 5-1 on Sunday afternoon to win the bronze medal at the Cavendish Cup U SPORTS championship.

Chase Marchand had a huge game with 48 saves in the X-Men net to secure the victory and Adam Holwell scored a pair of goals for StFX.

U SPORTS silver medalists last year, the X-Men secured their third national medal in the past four years, having also won silver in 2016. It is their sixth bronze medal in team history as they have 11 total with one gold (2004), four silver and six bronze.

This win was a meaningful one for the X-Men who were inspired to victory by 11-year old Oliver Smith, a local youth from Antigonish, NS who has been a big part of their team over the course of their playoff run. Known for his fundraising efforts for Ewings Sarcoma – the very cancer he is fighting himself – through the sale of unique Ollie Bots, Smith was in attendance throughout the weekend with the X-Men and delivered a pre-game speech before each game.

X-Men captain Mark Tremaine noted, “We played for a bronze medal a couple years ago and we couldn’t find a way to get up for it, but this year we knew the game was bigger than us, bigger than our team and we just wanted to go out and win it for us and win it for our little buddy and I’m glad we did that.”

StFX got on the board early as defenseman Adam Holwell sniped one from the point while on the power play two minutes into the game. Daniel Robertson and Regan Spears had helpers on the play.

The Huskies were pressuring for the equalizer but Chase Marchand held his ground in the StFX net, turning aside several shots on goal.

He stopped veteran forward Michael Sofillas from point blank range with eight minutes left in the period to keep the lead intact. Wyatt Johnson also had a good chance for Saskatchewan from in tight.

The X-Men added to their lead off another man-advantage later in the period as Cole MacDonald blasted a shot from the point through traffic in front of the Huskies net to beat Travis Child. Bryson Cianfrone and Adam Laishram were in on the assists as the goal came at 12:41.

Levi Cable thought he got his team on the board with a power play marker with 42 seconds left in the period but his shot off the cross bar was ruled ‘no goal’ after the play was sent to video review, keeping the 2-0 StFX lead intact.

The X-Men took the lead into the dressing room after 20 minutes of play despite being outshot 21-9 in the opening period.

Holwell notched his second of the game just 1:26 into the second after the X-Men came up ice on a partial three-on-one and Cianfrone made a nice drop pace as Holwell had lots of room and lots of time to snap the puck past Child.

The Huskies continued to throw shots on the X net, but Marchand was up the task and kept them off the scoresheet, including facing several shots on a power play midway through the period.

Matt Needham increased the StFX lead to 4-0 with four minutes left in the period as he took a pass from Tremaine down low and beat Child over the shoulder on the short side.

The Huskies again dominated in shots with a 17-3 margin in the second period but were unable to solve Marchand.

Saskatchewan started off the third period on a power play but could not take advantage and break the goose egg.

The X-Men went up 5-0 off a Matt Graham goal 3:28 into the third. He tipped in a Will Thompson shot from the point.

The Huskies broke the shutout with a late third period goal from Parker Thomas as the X-Men skated to the 5-1 victory, rebounding from a loss the previous night to UNB in the semifinal.

Coach Peddle was proud of the way his team regrouped following their disappointing loss the night before, noting, “It was obviously a tough, tough defeat last night for a lot of reasons, so getting the guys to get right back up and play a game today, it’s a tough game to play and challenging for the guys. But it speaks to the character of this group, they cared a lot about this game and they wanted to win this game and I think that showed this afternoon.”

The X-Men have competed at the University Cup for the past five consecutive seasons. Coach Peddle commented, “We come to this tournament to win this tournament, and we have had some really painful losses along the way. Losing last night was very tough for us but we are leaving today with a medal and to be considered one of the top three teams in the country is a very big accomplishment and is something I am very proud of as a coach.” 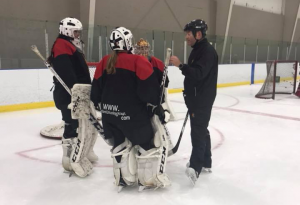 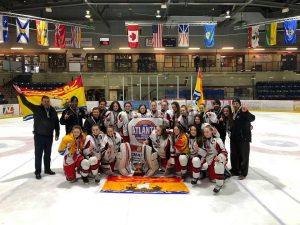 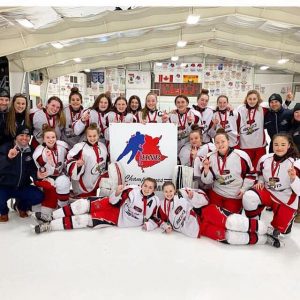 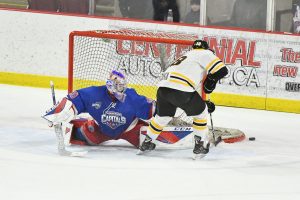 MHL GOALTENDER OF THE YEAR

We are proud to open the 2021 Registration for Summer Camps in the maritimes — 100$ Deposit ONLY to save your spot — Please use menu for specific program information. If you have any questions please email us or contact us by phone 1.888.421.0000 To register for all programs